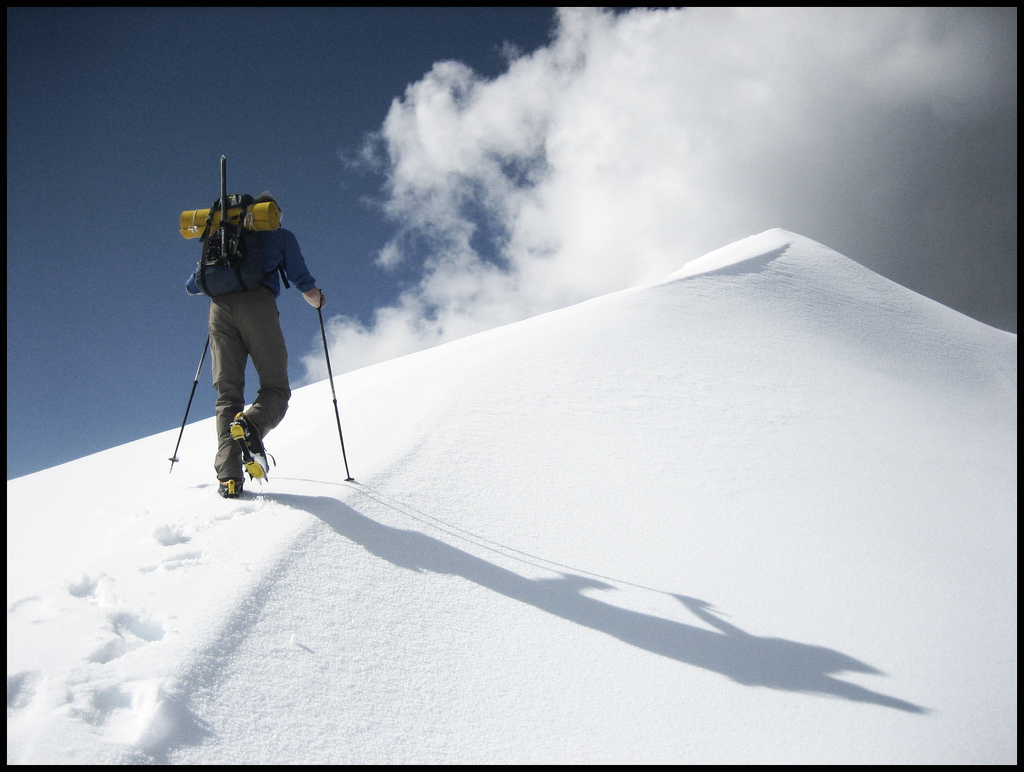 In our third installment of the best winter gear of 2013, we’re looking at snowshoes. Traction, bindings, and weight—these are the biggest differentiators. Let’s start with traction. For steep, icy, or rocky terrain, go aggressive with as many underfoot claws in as many locations as you can get, as well as a heel lifter to save your calves on steep climbs. If flat or gently rolling terrain is more your style, lower-profile teeth are all you need—huge claws underfoot are not only overkill, they can also make for an awkward gait. There are two main kinds of bindings: free-floating, which rotate (or float) under the balls of your feet, and fixed, which bring the entire shoe up with each step. There are pros and cons to each, the main considerations being that free-floating bindings allow you to walk more naturally and shed snow better but can be difficult to back up in, whereas fixed are more comfortable and maneuverable but have a tendency to kick up snow. Whichever way you go, shop for snowshoes in the boots you’ll be wearing them with, as some bindings mate better with lighter boots, some with bulkier. Check for pressure points; fiddle with the straps. Finally, weight: Buy snowshoes fully geared-up, with boots and a loaded pack. Generally, the bigger the snowshoe, the more float. But remember, the bigger the snowshoe, the clumsier it can be to walk in. When in doubt, go smaller.

At just a hair over two pounds per pair, the Race is one of the lightest snowshoes on the planet, and its fixed binding felt “practically spring-loaded,” according to one snowshoe-racing tester. (The downside is that it kicks soft snow up over your head when you’re moving quickly.) Of course, you don’t need to run in your snowshoes to appreciate the Race. In all but the deepest snow and the most technical terrain, it proved more than adequate. The light but surprisingly durable titanium crampons kept us sure-footed on icy hills, and the V-shaped, 22-inch-long frame (the Race comes in only one unisex size) provided ample float in up to eight inches of fresh snow. And it did all that while weighing roughly half as much as the average snowshoe.

These beefy shoes are made from aircraft-grade aluminum, and flexible plastic joints at the toe and heel allow the entire deck to flex slightly, increasing shoe-to-snow contact on uneven terrain. Plus, the two main crampons rotate independently for more precise and secure footing when sidehilling.

The Easton has bigger claws and thus looks badass, but the revamped Lightning Ascent has teeth all around the frame, and a new two-pronged toe crampon flexes to bite into uneven snow. Add in a sturdy heel lifter and a free-floating and supremely adjustable binding (four ultrasecure rubber straps are easy to manipulate in gloves), and you’ve got a shoe that’s up for just about any terrain. Smart: An add-on tail ($50) allows you to buy a smaller, more maneuverable snowshoe and attach more float when you need it.

The Mountaineer isn’t as toothy as either the Easton or the MSR. But if you’re not looking to tackle the steepest and iciest trails you can find, that’s a good thing—big, aggressive teeth only get in the way of your natural walking gait on flatter ground. And the pintail-shaped Mountaineer has plenty of bite for moderate terrain. As one tester noted, there’s an “alligator’s mouth” of steel underfoot. The fixed binding accommodates all boot sizes but is poorly designed—it works fine but is unnecessarily complicated.