Tensions rise as Canada and the U.S. hash out a restructuring of the North American Free Trade Agreement (NAFTA). With the Mexico/USA agreement ending, many are looking at what will happen with Canada during these talks. Media coverage makes it hard for people to not worry about what this could mean.

People take buying from Canada and the U.S. for granted and expect a level of savings when cross border shopping. To help break down the situation, here are a few ways to understand it and what this could mean.

Current NAFTA’s effect on buying from Canada and the U.S.

Since its implementation in 1994, NAFTA has pulled in billions in imports and exports between Canada, USA, and Mexico. Analysts say that NAFTA has brought a net gain in nations financial growth, but many argue that it promotes a level of undercutting which leads to layoffs and inequality. NAFTA not only includes the selling of goods but also includes services.

According the Office of United States Trade Representative, in 2017 U.S. goods and services trade with Canada totaled an estimated $673.1 billion (exports $340.7 billion, imports: $332.3 billion) with a trade surplus with Canada at $8.4 billion.

For consumers, these discounts/cost cutting efficiencies for industry haved allowed people to purchase ordinary goods (everything from fruits to luxury cars) at discounted rates. 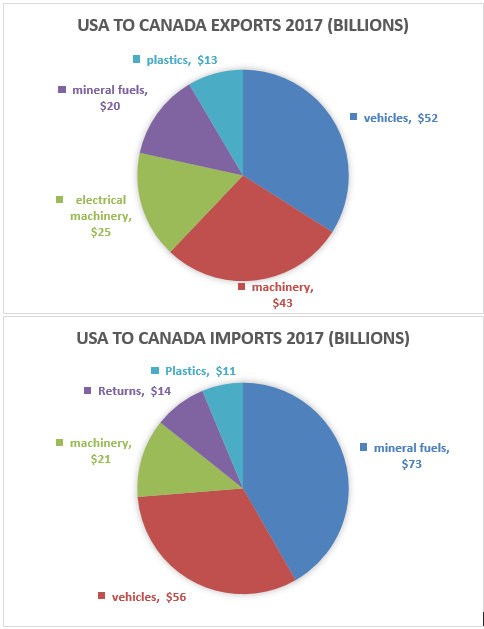 Future Impacts of an Altered NAFTA

President Donald Trump’s position of renegotiating and restructuring the deal aims to decrease the unintended negative effects of the deal. This generally means US businesses and residents will either have to pay less or Canadians will pay more.

The reason for this is how additional taxes and tariffs are applied to finished goods and services. Often, when businesses are hit with additional fees they shift the cost over to the consumers or end-users.

An example of this can be found in several industries, like agriculture. If farmers are taxed more for producing and exporting grain, the bread makers would have to pay more and end up raising their prices for the bread to reflect the additional cost. This all gets bumped down the supply chain and the consumer has to pay.

Shaky consumer confidence and increased uncertainty is a recipe for disaster in the stock market. People not wanting to invest in foreign enterprise harms the overall wealth of the countries and international trade.

These industries bring in the most amount of money from both exports and imports. Changes to these figures could have drastic implications like: a loss of jobs, increased cost of goods and services, loss of opportunity, hurt investor confidence and many other negative factors.

Agriculture, snack foods, and various other industries that total billions of import/export dollars can also be affected by small changes in the agreement. This means that there could be a rise in cost for ordinary grocery items.

How can Consumers be Shielded From the Potential Changes?

Buying from Canada and the U.S. may get a little pricier and more difficult to get around depending on how these talks proceed. It is still uncertain how things will turn out, but consumers can take steps to better brave the storm.

Luckily for consumers, parcel delivery services won’t impact business. Buying from Canada and the U.S. can be made easier by purchasing from the country of origin and then forwarding the package.

Reship can help by avoiding additional shipping fees when buying from multiple vendors, having the ability to ship farther, and provide business solutions by acting as a return facility for customers.